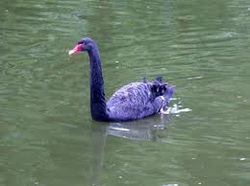 Scientific Classification
Kingdom: Animalia
Phylum: Chordata
Class: Aves
Order: Anseriformes
Family: Anatidae
Genus: Cygnus
Species: C. atratus
Binomial name: Cygnus atratus
Description
Length: 110 to 142 cm (43 to 56 in)
Weight: 3.7 to 9 kg (8.1 to 20 lb)
Wingspan: 1.6 to 2 m (5.3 to 6.5 ft)
Other: Black Swans are primarily black-feathered birds, with white flight feathers. The bill is bright red, with a pale bar and tip; and legs and feet are greyish-black. The neck is long (relatively the longest neck among the swans) and curved in an "S"-shape. Cobs (males) are slightly larger than pens (females), with a longer and straighter bill. Cygnets (immature birds) are a greyish-brown with pale-edged feathers.
Subspecies
Behaviour
The Black Swan utters a musical and far reaching bugle-like sound, called either on the water or in flight, as well as a range of softer crooning notes. It can also whistle, especially when disturbed while breeding and nesting. When swimming, Black Swans hold their necks arched or erect, and often carry their feathers or wings raised in an aggressive display. In flight, a wedge of Black Swans will form as a line or a V, with the individual birds flying strongly with undulating long necks, making whistling sounds with their wings and baying, bugling or trumpeting calls. The Black Swan is unlike any other Australian bird, although in poor light and at long range it may be confused with a Magpie Goose in flight. However, the Black Swan can be distinguished by its much longer neck and slower wing beat.
Predators or Prey?
In addition to the natural threats they face from foxes, mink & botulism, modern society has added several more such as pollution, vandalism, uncontrolled dogs, fishing-tackle and lead poisoning, as well as unmarked pylons, overhead cables & bridges. Black Swans have no prey. This is because their diet consists of plant material, and are therefore herbivores.
Diet
The Black Swan is almost exclusively herbivorous, and while there is some regional and seasonal variation, the diet is generally dominated by aquatic and marshland plants. In New South Wales the leaf of reedmace (genus Typha) is the most important food of birds in wetlands, followed by submerged algae and aquatic plants like Vallisneria. In Queensland aquatic plants like Potamogeton and stoneworts and algae are the dominant foods. The exact composition varies with water level, in flood situations where normal foods are out of reach Black Swans will feed on pasture plants on shore. The Black Swan feeds in a similar manner to other swans. When feeding in shallow water it will dip its head and neck under the water, and it is able to keep its head flat against the bottom while keeping its body horizontal. In deeper water the bird up-ends to reach lower. Black Swans are also able to filter feed at the water's surface.
Habitat
The Black Swan's preferred habitat extends across fresh, brackish and salt water lakes, swamps and rivers with underwater and emergent vegetation for food and nesting materials. Permanent wetlands are preferred, including ornamental lakes, but Black Swans can also be found in flooded pastures and tidal mudflats, and occasionally on the open sea near islands or the shore.
Conservation
The Black Swan is protected under the Australian National Parks and Wildlife Act, 1979. It is evaluated as Least Concern on the IUCN Red List of Threatened Species.
Reproduction
Like other swans, the Black Swan is largely monogamous, pairing for life (about 6% divorce rate). Recent studies have shown that around a third of all broods exhibit extra-pair paternity. An estimated one-quarter of all pairings are homosexual, mostly between males. They steal nests, or form temporary threesomes with females to obtain eggs, driving away the female after she lays the eggs.

Generally, Black Swans nest in the wetter winter months (February to September), occasionally in large colonies. A Black Swan nest is essentially a large heap or mound of reeds, grasses and weeds between 1 and 1.5 metres (3-4½ feet) in diameter and up to 1 metre high, in shallow water or on islands. A nest is reused every year, restored or rebuilt as needed. Both parents share the care of the nest. A typical clutch contains 4 to 8 greenish-white eggs that are incubated for about 35–40 days. Incubation begins after the laying of the last egg, in order to synchronise the hatching of the chicks. Prior to the commencement of incubation the parent will sit over the eggs without actually warming them. Both sexes incubate the eggs, with the female incubating at night. The change over between incubation periods is marked by ritualised displays by both sexes. If eggs accidentally roll out of the nest both sexes will retrieve the egg using the neck (in other swan species only the female performs this feat). Like all swans Black Swans will aggressively defend their nests with their wings and beaks. After hatching, the cygnets are tended by the parents for about 9 months until fledging. Cygnets may ride on their parent's back for longer trips into deeper water, but Black Swans undertake this behaviour less frequently than Mute and Black-necked Swans.