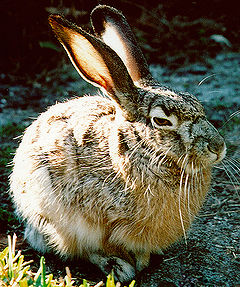 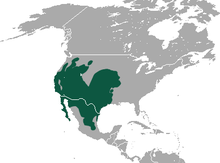 Scientific Classification
Kingdom: Animalia
Phylum: Chordata
Class: Mammalia
Order: Lagoporpha
Family: Leporidae
Genus: Lepus
Species: L. californicus
Binomial name: Lepus californus
Description
Length: 2 ft (61 cm)
Weight: 3 to 6 lb (1.4 to 2.7 kg)
Other: Like other jackrabbits, the blacktail has distinctive long ears, and the long, powerful rear legs characteristic of hares. the black-tailed jackrabbit is the third largest North American hare, after the antelope jackrabbit and the white-tailed jackrabbit. The black-tailed jackrabbit's dorsal fur is agouti (dark buff peppered with black), and its undersides and the insides of its legs are creamy white. The ears are black-tipped on the outer surface, and unpigmented inside. The ventral surface of the tail is grey to white, and the black dorsal surface of the tail continues up the spine for a few inches to form a short, black stripe. The females are larger than males, with no other significant differences.
Subspecies
Behaviour
The Black-tailed Jack rabbit does not migrate or hibernate during winter and uses the same habitat of 0.4 to 1.2 square miles (1 to 3 square km) year round. The black-tailed jackrabbit can run at speeds of up to 30 miles an hour and it can jump a distance of about 20 feet. When it is trying to evade predators like coyotes, foxes, bobcats, badgers and weasels, it moves in a zig-zag pattern. It flashes the white underside of its tail when threatened by a predator. This warns other jackrabbits or danger and can also confuse the predator. It can also swim by dog-paddling with all four of its feet. It is most active at night. It usually spends the day resting in a scraped out hollow in the shade.
Predators or Prey?
Black-tailed jackrabbit is an important prey species for raptors and carnivorous mammals, such as eagles, hawks, owls, coyotes, foxes, and wild cats. The Black-tailed Jackrabbit has no prey. This is because the species only feeds on plant material.
Diet
Its diet is composed of various shrubs, small trees, grasses and forbs. Shrubs generally comprise the bulk of fall and winter diets, while grasses and forbs are used in spring and early summer, but the pattern and plant species vary with climate.
Habitat
The Black-tailed Jackrabbit is a common hare of the western United States and Mexico, where it is found at elevations from sea level to up to 10,000 feet (3,000 m). The black-tailed jackrabbits occupy mixed shrub-grassland terrains.
Conservation
Black-tailed jackrabbits are not listed as threatened or endangered. Habitat availability is threatened to some extent by development and in some areas populations are dwindling. Their large numbers in orchards, agricultural fields, and rangelands can do considerable damage and ranchers and farmers often need to cull the populations. Populations of black-tailed jackrabbits undergo drastic fluctuations with numbers peaking every six to ten years. In some years more than 90 percent of western populations die from tularemia, which may or may not be related to the population changes.
Reproduction
Male black-tailed jackrabbit reach sexual maturity at about 7 months of age. Females usually breed in the spring of their second year, although females born in spring or early summer may breed in their first year. Ovulation is induced by copulation. The breeding season is variable depending upon latitude and environmental factors. In the northern part of its range in Idaho, black-tailed jackrabbit breeds from February through May. In Utah, black-tailed jackrabbit breed from January through July, with over 75% of females pregnant by April. The Kansas breeding season extends from January to August. Breeding in warm climates continues nearly year-round. Two peak breeding seasons corresponding to rainfall patterns and growth of young vegetation occur in California, Arizona, and New Mexico. In Arizona, for example, breeding peaks during winter (January–March) rains and again during June monsoons. The gestation period ranges from 41 to 47 days. More litters are born in warm climates: the number of litters born each year ranges from two per year in Idaho to seven in Arizona. Litter sizes are largest in the northern portions of black-tailed jackrabbit's range and decrease toward the south. Average litter size has been reported at 4.9 in Idaho, 3.8 in Utah, and 2.2 in Arizona.

Female black-tailed jackrabbit do not prepare an elaborate nest. They give birth in shallow excavations called forms that are no more than a few centimeters deep. Females may line forms with hair prior to giving birth, but some drop litters in existing depressions on the ground with no further preparation. Young are borne fully furred with eyes open, and are mobile within minutes of birth. Females do not protect or even stay with the young except during nursing. Ages of weaning and dispersal are unclear since the young are well camouflaged and rarely observed in the field. Captive black-tailed jackrabbit are fully weaned by 8 weeks. The young stay together for at least a week after leaving the form.