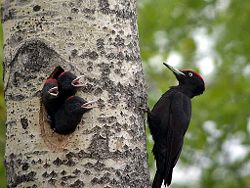 Scientific Classification
Kingdom: Animalia
Phylum: Chordata
Class: Aves
Order: Piciformes
Family: Picidae
Genus: Dryocopus
Species: D. martius
Binomial name: Dryocopus martius
Description
Beak length: 2.5 in (6.3 cm)
Length: 45 to 50 cm (18 to 20 in)
Wingspan: 64 to 84 cm (25 to 33 in)
Weight: 300 to 400 g (10.6 to 14.2 oz)
Other: The plumage of this crow-sized woodpecker is entirely black apart from a red crown. In males, the entire crown is red, but in females only the top hindcrown is red with the rest of the body all black. The sexes differ even as nestlings.
Behaviour
The woodpecker feeds by using its bill to hammer on dead trees to dig out carpenter ants and wood-boring grubs. Their voice is remarkable in that it has two different calls. One is a short single high-pitched note done only twice in a row. The other is a screech-like shrill while in flight. Unlike other woodpecker species, the Black Woodpecker does not have a dipping, bounding flight. The woodpecker digs a nest hole, usually in a live poplar or pine tree where it lays four or more eggs.
Predators or Prey?
The Black Woodpecker's main predator's are mainly birds of prey such as, Owls, Red tailed hawks, and Eagles. The prey of the Black Woodpeckers are insects such as ants, beetles, grubs, weevils, and spiders.
Diet
The Black-backed Woodpeckers diet includes approximatley 75% of insects such as wood-boring beetles, grubs, weevils, ants, other beetles, and spiders. Besides insects, it also feeds on berries and other small fruits, acorns and nuts.
Habitat
The Black Woodpecker lives in Central Alaska to Canada southward through Northern US Rockies. It is a casual winter visitor to Pennsylvania, Ohio, Indiana, and Nebraska.
ConservationThis species has a large range, with an estimated global Extent of Occurrence of 10,000,000 km². It has a large global population, including an estimated 1,500,000-2,900,000 individuals in Europe (BirdLife International in prep.). Global population trends have not been quantified, but there is evidence of a population increase (del Hoyo et al. 2002), and so the species is not believed to approach the thresholds for the population decline criterion of the IUCN Red List (i.e. declining more than 30% in ten years or three generations). For these reasons, the species is evaluated as Least Concern.
Reproduction
The nest of this species is generally excavated by both sexes, mostly the male, in the body of dead trees such as spruces and birches. The entrance hole is about 1 1/2-2" in diameter, and anywhere from 10-15" deep. The nest cavity is smooth and broad at the bottom and can be anywhere from 5-70 feet up from the ground. During the months of Mid-May to Mid-June, approximately 3-6 eggs are laid which are rounded and pure white and only one brood is raised in the season. Incubation is by both sexes which lasts approximately 14 days. The young follow their parents until autumn.