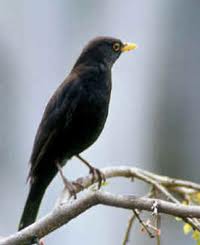 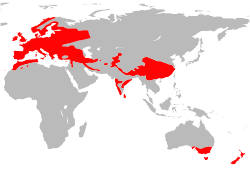 Scientific Classification
Kingdom: Animalia
Phylum: Chordata
Class: Aves
Order: Passeriformes
Family: Turdidae
Genus: Turdus
Species: T. merula
Binomial name: Turdus merula
Description
Length: 23.5 to 29 cm (9.25 to 11.4 in)
Weight: 80 to 125 g (2.8 to 4.4 oz)
Other: The adult male has glossy black plumage, a long tail, blackish-brown legs, a yellow eye-ring and an orange-yellow bill. The bill darkens somewhat in winter. The adult female is sooty-brown with a dull yellowish-brownish bill, a brownish-white throat and some weak mottling on the breast. The juvenile is similar to the female, but has pale spots on the upperparts, and the very young juvenile also has a speckled breast. Young birds vary in the shade of brown, with darker birds presumably males. The first year male resembles the adult male, but has a dark bill and weaker eye ring, and its folded wing is brown, rather than black like the body plumage.
Subspecies
Behaviour
The male Common Blackbird defends its breeding territory, chasing away other males or utilising a "bow and run" threat display. This consists of a short run, the head first being raised and then bowed with the tail dipped simultaneously. If a fight between male Blackbirds does occur, it is usually short and the intruder is soon chased away. The female Blackbird is also aggressive in the spring when it competes with other females for a good nesting territory, and although fights are less frequent, they tend to be more violent.

The bill’s appearance is important in the interactions of the Common Blackbird. The territory-holding male responds more aggressively towards models with orange bills than to those with yellow bills, and reacts least to the brown bill colour typical of the first-year male. The female is, however, relatively indifferent to bill colour, but responds instead to shinier bills.

As long as winter food is available, both the male and female will remain in the territory throughout the year, although occupying different areas. Migrants are more gregarious, travelling in small flocks and feeding in loose groups in the wintering grounds. The flight of migrating birds comprises bursts of rapid wing beats interspersed with level or diving movement, and differs from both the normal fast agile flight of this species and the more dipping action of larger thrushes.

Predators or Prey?
The Blackbird's predators consist of Jay, Magpie, Sparrowhawk. The Blackbird has a lot more prey, such as; the Banded Centipede, Brandling worm, Common earthworm, Common frog, Common garden snail, Crane Fly, Moths, Sawflies, Slugs, and Snails.
Diet
At any time of year, except during severe frosts, you may see a Blackbird probing the grass for worms and grubs and they are never afraid of coming to the bird table, or even the window, for a free hand out. Of all the treats on offer at the bird table it seems that the Blackbird likes sultanas best closely by mealworms.
Habitat
Common over most of its range in woodland, the Common Blackbird has a preference for deciduous trees with dense undergrowth. However, gardens provide the best breeding habitat with up to 7.3 pairs per hectare (nearly three pairs per acre), with woodland typically holding about a tenth of that density, and open and very built-up habitats even less. They are often replaced by the related Ring Ouzel in areas of higher altitude.

The Common Blackbird occurs up to 1000 metres (3300 ft) in Europe, 2300 metres (7590 ft) in North Africa, and at 900–1820 metres (3000–6000 ft) in peninsular India and Sri Lanka, but the large Himalayan subspecies range much higher, with T. m. maximus breeding at 3200–4800 metres (10560–16000 ft) and remaining above 2100 metres (6930 ft) even in winter.
Conservation
The Common Blackbird has an extensive range, estimated at 10 million square kilometres (3.8 million square miles), and a large population, including an estimated 79 to 160 million individuals in Europe alone. The species is not believed to approach the thresholds for the population decline criterion of the IUCN Red List (i.e., declining more than 30% in ten years or three generations), and is therefore evaluated as Least Concern. In the western Palaearctic, populations are generally stable or increasing, but there have been local declines, especially on farmland, which may be due to agricultural policies that encouraged farmers to remove hedgerows (which provide nesting places), and to drain damp grassland and increase the use of pesticides, both of which could have reduced the availability of invertebrate food.
Reproduction
The male Common Blackbird attracts the female with a courtship display which consists of oblique runs combined with head-bowing movements, an open beak, and a "strangled" low song. The female remains motionless until she raises her head and tail to permit copulation. This species is monogamous, and the established pair will usually stay together as long as they both survive. Pair separation rates of up to 20% have been noted following poor breeding. Although socially monogamous, there have been studies showing as much as 17% extra pair paternity. Nominate T. merula may commence breeding in March, but eastern and Indian races are a month or more later, and the introduced New Zealand birds start nesting in August. The breeding pair prospect for a suitable nest site in a creeper or bush, favouring evergreen or thorny species such as ivy, holly, hawthorn, honeysuckle or pyracantha, and the female builds a neat cup-shaped nest from grasses and similar vegetation. She lays three to five (usually four) bluish-green eggs marked with reddish-brown blotches. Eggs of birds of the southern Indian races are paler than those from the northern subcontinent and Europe. The female incubates for 12–14 days before the altricial chicks are hatched naked and blind. Fledging takes another 10–19 (average 13.6) days, with both parents feeding the young and removing faecal sacs. The young are fed by the parents for up to three weeks after leaving the nest, and will follow the adults begging for food. If the female starts another nest, the male alone will feed the fledged young. Second broods are common, with the female reusing the same nest if the brood was successful, and three broods may be raised in the south of the Common Blackbird's range.