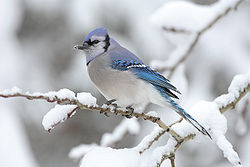 Green: All year residence Yellow: Breeding only Blue: Wintering only
Scientific Classification
Kingdom: Animalia
Phylum: Chordata
Class: Aves
Order: Passeriformes
Family: Corvidae
Genus: Cyanocitta
Species: C. cristata
Binomial name: Cyanocitta cristata
Description
Length: 22 to 30 cm (9 to 12 in)
Weight: 70 to 100 g (2.5 to 3.5 oz)
Wingspan: 43 to 43 cm (13 to 17 in)
Other: There is a pronounced crest on the head, a crown of feathers, which may be raised or lowered according to the bird's mood. When excited or aggressive, the crest may be fully raised. When frightened, the crest bristles outwards, brushlike. When the bird is feeding among other jays or resting, the crest is flattened to the head.Its plumage is lavender-blue to mid-blue in the crest, back, wings, and tail, and its face is white. The underside is off-white and the neck is collared with black which extends to the sides of the head. The wing primaries and tail are strongly barred with black, sky-blue and white. The bill, legs, and eyes are all black. Males and females are nearly identical. As with other blue-hued birds, the Blue Jay's coloration is not derived from pigments but is the result of light interference due to the internal structure of the feathers; if a blue feather is crushed, the blue disappears as the structure is destroyed. This is referred to as structural coloration. Blue Jays have strong black bills used for cracking nuts and acorns, and for eating corn, grains and seeds, although they also eat insects such as beetles, grasshoppers, and caterpillars.
Subspecies
Behaviour
Blue Jays can make a large variety of sounds, and individuals may vary perceptibly in their calling style. Like other corvids, they may learn to mimic human speech. Blue Jays can also copy the cries of local hawks so well that it is sometimes difficult to tell which it is. Their voice is typical of most jays in being varied, but the most commonly recognized sound is the alarm call, which is a loud, almost gull-like scream. There is also a high-pitched jayer-jayer call that increases in speed as the bird becomes more agitated.This particular call can be easily confused with the chickadee's song because of the slow starting chick-ah-dee-ee. Blue Jays will use these calls to band together to mob potential predators such as hawks and drive them away from the jays' nests. Blue Jays also have quiet, almost subliminal calls which they use among themselves in proximity. One of the most distinctive calls of this type is often referred to as the "rusty pump" owing to its squeaky resemblance to the sound of an old hand-operated water pump. The Blue Jay (and other corvids) are distinct from all other songbirds for using their call as a birdsong.
Predators or Prey?
Blue jays will actively defend their nests against predators. Both parents will attack and chase hawks, falcons, raccoons, cats, snakes, squirrels, and even humans away from their nests. Adult blue jays are often preyed on by various species of hawks, owls, and falcons. Nestlings are preyed upon by squirrels, cats, snakes, American crows, other jays, raccoons, opossums, and birds of prey, such as hawks.  Blue Jays prey upon small invertebrates such as grasshoppers, caterpillars, mice, bird eggs, and baby birds.
Diet
The Blue Jay's food is sought both on the ground and in trees and includes virtually all known types of plant and animal sources, such as acorns and beech mast, weed seeds, grain, fruits and other berries, peanuts, bread, meat, small invertebrates of many types, scraps in town parks, bird-table food and rarely eggs and nestlings. Blue Jays will sometimes cache food, though to what extent differs widely among individuals.
Habitat
The Blue Jay breeds in both deciduous and coniferous forests, and is common near residential areas. The Blue Jay occupies a variety of habitats within its large range, from the pine woods of Florida to the spruce-fir forests of northern Ontario. It is less abundant in denser forests, preferring mixed woodlands with oaks and beeches. It has expertly adapted to human activity, occurring in parks and residential areas, and can adapt to wholesale deforestation with relative ease if human activity creates other means for the jays to get by.
Conservation
Blue Jays do well around humans, and their populations are secure. The most frequent cause of death associated with humans comes from attacks by cats and dogs.
Reproduction
The mating season begins in mid-March, peaks in mid-April to May, and extends into July. Any suitable tree or large bush may be used for nesting, though an evergreen is preferred. The nest is preferentially built at a height of 3 to 10 m. It is cup-shaped and composed of twigs, small roots, bark strips, moss, other plant material, cloth, paper, and feathers, with occasional mud added to the cup. Blue Jays are not very picky about nesting locations. If no better place is available - e.g. in a heavily deforested area - they will even use places like the large mailboxes typical of the rural United States. They also appropriate nests of other mid-sized songbirds as long as these are placed in suitable spots; American robin nests are commonly used by Blue Jays, for example. Blue Jays typically form monogamous pair bonds for life. Both sexes build the nest and rear the young, though only the female broods them. The male feeds the female while she is brooding the eggs. There are usually 4–5 eggs laid and incubated over 16–18 days. The young fledge usually between 17–21 days after hatching. After the juveniles fledge, the family travels and forages together until early fall, when the young birds disperse to avoid competition for food during the winter.