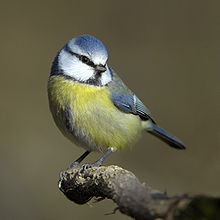 Scientific Classification
Kingdom: Animalia
Phylum: Chordata
Class: Aves
Order: Passeriformes
Family: Paridae
Genus: Cyanistes
Species: C. caeruleus
Binomial name: Cyanistes caeruleus
Description
Length: 10.5 to 12 cm (4.2 to 4.8 in)
Other: The azure blue crown and dark blue line passing through the eye and encircling the white cheeks to the chin give the Blue Tit a very distinctive appearance. The forehead and a bar on the wing are white. The nape, wings and tail are blue; the back is yellowish green; the under parts mostly sulphur-yellow with a dark line down the abdomen. The bill is black, the legs bluish grey, and the irides dark brown. The sexes are similar, but under ultraviolet light, males have a brighter blue crown. Young Blue Tits are noticeably more yellow.
Subspecies
The systematics of the Blue Tit complex are unsettled. There are at least nine recognised subspecies:

Behaviour
This is a common and popular European garden bird, due to its perky acrobatic performances when feeding on nuts or suet. It swings beneath the holder, calling "tee, tee, tee" or a scolding "churr". The song period lasts almost all the year round, but is most often heard during February to June. Blue and Great Tits form mixed winter flocks, and the former are perhaps the better gymnasts in the slender twigs. A Blue Tit will often ascend a trunk in short jerky hops, imitating a Treecreeper. As a rule the bird roosts in ivy or evergreens, but in harsh winters will nest wherever there is a suitable small hole, be it in a tree or nesting box. Blue tits are very agile and can hang from almost anywhere. An interesting example of culturally transmitted learning in birds was the phenomenon dating from the 1960s of Blue Tits teaching one another how to open traditional British Milk bottles with foil tops, to get at the cream underneath. This behaviour has declined recently because of the trend toward buying low-fat (skimmed) milk, and the replacement of doorstep delivery by supermarket purchases of milk.
Predators or Prey?
Main predators include grey squirrels and great spotted woodpeckers. In the past, nesting blue tits have been taken over by tree sparrows. But this is hardly a threat nowadays following a dramatic decline in tree sparrow numbers. The prey of the Blue Tit are insects, such as coccids and aphids.
Diet
The Blue Tit is a valuable destroyer of pests, though it has not an entirely clean sheet as a beneficial species. It is fond of young buds of various trees, and may pull them to bits in the hope of finding insects. No species, however, destroys more coccids and aphids, the worst foes of many plants. It takes leaf miner grubs and green tortrix moths (Tortricidae). Seeds are eaten, as with all this family.
Habitat
The Blue Tit has many different habitats as its range is across many different countries. The habitats are; oak wood, farmland, beech wood, hedgerows, park land, broad leaf forest, coniferous forest, and urban. This means that the Blue Tit is very adaptable to different surroundings.
Conservation
Blue Tit populations often decrease considerably during harsh winters or after poor breeding seasons where the weather is cold and wet, particularly if this coincides with the emergence of the caterpillars on which the nestlings are fed. The Blue Tit has an average life expectancy of 1.5 years.
Reproduction
Blue Tits will nest in any suitable hole in a tree, wall, or stump, or an artificial nest box, often competing with House Sparrows or Great Tits for the site. Few birds more readily accept the shelter of a nesting box; the same hole is returned to year after year, and when one pair dies another takes possession. It is estimated by the RSPB that there are 3,535,000 breeding pairs in the UK. The bird is a close sitter, hissing and biting at an intruding finger. In the South West of England such behaviour has earned the Blue Tit the colloquial nickname "Little Billy Biter". When protecting its eggs it raises its crest, but this is a sign of excitement rather than anger, for it is also elevated during nuptial display. The nesting material is usually moss, wool, hair and feathers, and the eggs are laid in April or May. The number in the clutch is often very large, but seven or eight are normal, and bigger clutches are usually laid by two or even more hens. It is not unusual for a single bird to feed the chicks in the nest at a rate of one feed every ninety (90) seconds during the height of the breeding season. Its colourful mix of blue, yellow, white and green make the blue tit one of the most attractive resident garden birds. Almost any garden with a peanut feeder will attract them and they readily breed in nestboxes. In winter they form flocks with other tit species and a garden with four or five at a bird table at any one time, may be feeding 20 or more