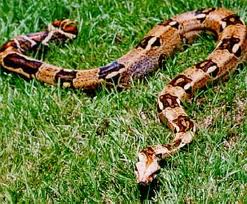 Facts
Conservation Status: CITES Appendix II
Location: North, Central, and South America, some Caribbean islands
Lifespan: 20 to 30 years in captivity
Scientific Classification
Kingdom: Animalia
Phylum: Chordata
Subphylum: Vertebrata
Class: Reptilia
Order: Squamata
Suborder: Serpentes
Family: Boidae
Subfamily: Boinae
Genus: Boa
Species: B. constrictor
Binomial name: Boa constrictor
Description
Length: Males - 6 to 8 ft. Females - 7 to 10 ft.
Weight: Up to 27 kg (60 lb)
Other: The Boa constrictor is a heavy-bodied snake. There is clear sexual dimorphism seen in the species, with females generally being significantly larger in both length and girth than males. Other examples of sexual dimorphism in the species include the fact that males generally have longer tails to contain the hemipenes and also longer pelvic spurs, which are used to grip and stimulate the female during copulation. Pelvic spurs are the only external sign of the rudimentary hind legs and pelvis, seen in all boas and pythons.
Subspecies

During breeding season the female boa will emit a scent from her cloaca to attract males, who may then wrestle for the right to breed with her. During breeding the male will curl his tail around the females and the hemipenes will be inserted. Copulation can last from a few minutes to several hours, and may occur several times over a few week period. After this period ovulation may not occur immediately, however the female can hold the sperm inside her for up to one year. When the female ovulates, a mid-body swell can be noticed that appears similar to after the snake has eaten a large meal. The female will then shed 2 to 3 weeks after ovulation, with what is known as a post ovulation shed which will last another 2–3 weeks, which is longer than a normal shed. The gestation period, which is counted from the post ovulation shed, is approximately 100–120 days. The female will then give birth to young that average 15-20 inches (38–51 cm) in length. The litter size varies between females, but can be between 10 and 65 young with an average of 25, although some of the young may be still borns or non fertilised eggs known as "slugs". The young are independent at birth and will grow rapidly for the first few years, shedding regularly (once every one to two months). At between 3–4 years Boa constrictors become sexually mature and will have reached the adult size of between 6–10 ft, although they will continue to grow at a slow rate for the rest of their lives. At this point they will shed less frequently, approximately every 2–4 months.