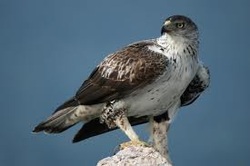 Facts
Conservation Status: Least Concern
Location: southern Europe, Africa both north and south of the Sahara Desert and across southern Asia to Indonesia.
Lifespan: 20 to 30 years
Scientific Classification
Kingdom: Animalia
Phylum: Chordata
Class: Aves
Order: Accipitriformes
Family: Accipitridae
Genus: Aquila
Species: A. fasciata
Binomial name: Aquila fasciata
Description
Length: 65 to 72 cm
Wingspan: Male - Less than 46.8 cm. Female - More than 51 cm
Weight: 1600 to 2500 g
Other: The male and female have similar plumage, although the adult male is whiter and more finely streaked than of a female of similar age. Juveniles and adults can be sexed by size. Adults have a dark upperpart, white underparts with dark streaks, pale grey tail, the wings are dark on the top, and light underneath, and yellow legs. Also, juveniles have pale brown colours, not dark brown like the adults.
Behaviour
Bonelli's Eagle migrates in winter. Adults are sedentary but in winter their range can be bigger than during the breeding seasons [Mebs & Schmidt 2006]. Juveniles disperse more widely, probably to avoid competition for food with the territorial adults.
Predators or Prey?
Humans are the only main predators of the Bonelli's Eagle because of habitat loss, electrocution on pylons, illegal trapping, and poisoning. The Bonelli's Eagle is a powerful hunter that is capable of killing large birds like herons or storks, and also smaller animals like rabbits and Red-legged Partridges.
Diet
The Bonelli's Eagle feeds on rabbits and Red-legged Partridges, when they occur. This species also feeds on a lot of pigeons, crows, ducks, gulls, and others up to the size of herons. During the summer, lizards are also fed on.
Habitat
In Europe, the Bonelli's Eagle is a bird of the Mediterranean landscape. It prefers dry and open or half open habitat in mountainous areas.Outside the breeding season it can also be found in lowlands and wetlands where it can hunt waterfowl.
Conservation
In order to keep current populations stable or even help them recover and increase, the mortality through electrocution must be eliminated. Many birds die every year because of unsafe power poles. The remaining habitat must be protected incl. those places which are not occupied by the species at the moment but can be in the future if the population increases again. Large trees suitable for nesting, especially in southern Portugal were most pairs nest on trees, should be protected from logging. Disturbance due to recreational activities or forest work during the breeding season must be avoided. Nests which are endangered by human disturbance or illegal killing can be guarded if enough volunteers are available.
Reproduction
Bonelli's Eagles can breed within 3 years of birth. The adults are monogamous, meaning that the pair stay together, even outside of breeding season. Most Bonelli's Eagles breed on cliffs, but there are also some nests on power poles or large trees. In Portugal in 2009, 64% of the total population nested in trees like Cork Oaks, Pines, and large Eucalyptus. The Bonelli's Eagle breeds rather early. Egg laying is normally between the beginning of February and the middle of March. Normally 2 eggs are laid, but sometimes 1 or 3 are laid. The chicks hatch after 37 to 40 days and stay in the nest between 55 to 70 days.