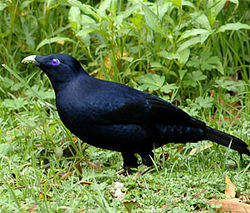 Note that the Gray Catbird (Dumetella carolinensis) and Black Catbird (Melanoptila glabrirostris) from the Americas and the Abyssinian Catbird (Parophasma galinieri) from Africa are unrelated birds that belong to different families.
Behaviour
The most notable characteristic of bowerbirds is their extraordinarily complex courtship and mating behaviour, where males build a bower to attract mates. There are two main types of bowers. One clade of bowerbirds build so-called maypole bowers that are constructed by placing sticks around a sapling; in some species these bowers have a hut-like roof. The other major bowerbuilding clade builds an avenue type bower made of two walls of vertically placed sticks. In and around the bower the male places a variety of brightly colored objects he has collected. These objects — usually different among each species — may include hundreds of shells, leaves, flowers, feathers, stones, berries, and even discarded plastic items, coins, nails, rifle shells, or pieces of glass. The males spend hours arranging this collection. Bowers within a species share a general form but do show significant variation, and the collection of objects reflects the biases of males of each species and its ability to procure items from the habitat, often stealing them from neighboring bowers. Several studies of different species have shown that colors of decorations males use on their bowers match the preferences of females.
Predators or Prey?
Animals such as Kookaburras, Raptors, and Brown Goshawks will prey on the nest. The female Bowerbirds may often freeze for up to 8 minutes if there is a predator near the nest. Bowerbirds only prey on insects.
Diet
Their diet consists mainly of fruit but may also include insects (fed to young), flowers, nectar and leaves in some species.
Habitat
The bowerbirds have an Austro-Papuan distribution, with ten species endemic to New Guinea, eight endemic to Australia and two found in both. Although their distribution is centered around the tropical regions of New Guinea and northern Australia, some species extend into central, western and southeastern Australia. They occupy a range of different habitats, including rainforest, eucalyptus and acacia forest, and shrublands.
Conservation
Bowerbirds are not listed as threatened on the Environment Protection and Biodiversity Conservation Act 1999. Bowerbird is listed as threatened on the Victorian Flora and Fauna Guarantee Act (1988). Under this Act, an Action Statement for the recovery and future management of this species has been prepared. On the 2007 advisory list of threatened vertebrate fauna in Victoria, the Spotted Bowerbird is listed as endangered.
Reproduction
The catbirds (subspecies) are monogamous and raise chicks with their mate, but all other bowerbirds are polygymous, with the female building the nest and raising the young alone. These latter species are commonly sexually dimorphic, with the female being more drab in color. Female bowerbirds build a nest by laying soft materials, such as leaves, ferns, and vine tendrils, on top of a loose foundation of sticks. They lay one or two eggs, which hatch after 19 to 24 days, depending on the species.